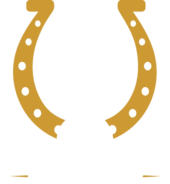 The Fletcher Street Urban Riding Club is no stranger to media attention — mostly from photographers and filmmakers who are attracted to the juxtaposition of an urban black teenager galloping a horse through the streets of North Philadelphia.Artist Mohamed Bourouissa came from Paris in 2014 after seeing the riders in a photography book. He didn’t want to make artwork about them; he wanted to make artwork with them. The riders were thrown for a loop.

“What you want to do is strange. We don’t understand what you want to do,” Bourouissa recalls them saying. “It was common for them to see other people come and take a picture and leave. But this guy wants to come to do a project, and live in this place, it’s so strange. Why does he want to do that?” 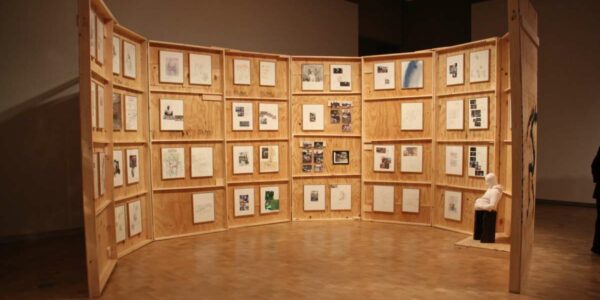 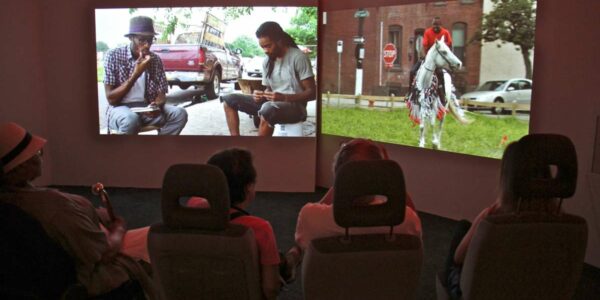 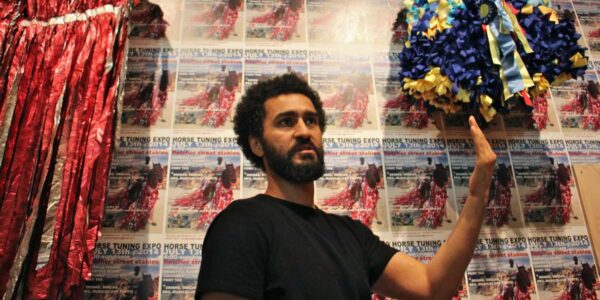 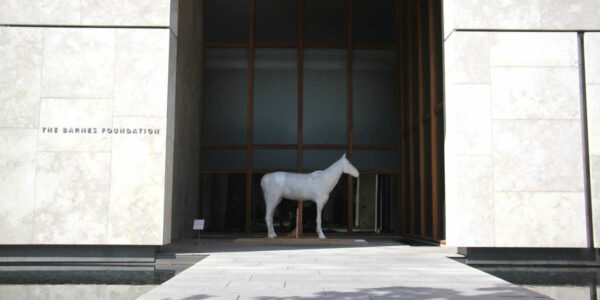 Bourouissa lived in North Philadelphia for eight months, documenting the horse club. His English is choppy, making him a misfit in North Philadelphia. He is also Algerian, which makes him a misfit in his native France. He said that outsider status helped him bond with the riders of Fletcher Street, whose love of horses have made them misfits in their own African-American neighborhood.“I felt some similarity between being an African American here in the United States as to be an Algerian in suburban France,” said Bourouissa. “For sure it’s totally different — I don’t want to say it’s the same — but there is a similarity.”

The self-imposed residency culminated in a horse pageantry event with elaborate garlands made by local artists.

“To be an French-Algerian in the French suburbs, and to be an African-American here, we have a common thing. But another part of my identity is to be an artist,” he said. “My community is here, too. My artist community.”

After working collaboratively in the field, literally, with Philadelphia equestrian riders and artists for eight months, Bourouissa returned to Paris to make studio work.

The Barnes Foundation invited Bourouissa to come back to Philadelphia — downtown this time — to display the work as a gallery installation.

Mohamed Bourouissa: Urban Riders is on display at the Barnes Foundation until October. It includes dozens of sketches hung on wooden structure resembling a horse stable, a 15-minute documentary film, and wall assemblages made of car parts and sheet metal printed with images of the urban riders.

The faces of the riders seem to be reflected in the shine of the pieces of car body, as they do from passing cars on the streets of North Philadelphia.

Bourouissa is influenced by the writings of Franz Fanon, the French writer from Martinique who thought deeply about post-colonial social struggles. He was a supporter of the Algerian war for independence from France.

Much of Bourouissa’s returns to images and relationships with people from a post-colonial underclass. “This link between Algeria, France, and the United States, I tried to make,” he said.

The Urban Riders of North Philadelphia

Born in Algeria, Mohamed Bourouissa began his career by documenting his friends in Paris’s suburban banlieues and staging photographs that express the tension of marginalized populations. In this sense, his current exhibition at the Barnes Foundation in Philadelphia, Urban Riders, is a continuation of his previous work. The Urban Riders project provides an in-depth look at a community and brings nobility to the equestrian enterprise of African American men and youth situated in Strawberry Mansion, a neighborhood on the verge of gentrification in northern Philadelphia.The story of the Fletcher Street Urban Riding Club goes back about a century, and may even have roots in the American south. Bourouissa first heard about the club through Martha Camarillo’s book Fletcher Street (2006); Camarillo is currently working on a documentary film on the same topic. For eight months, in 2014, Bourouissa immersed himself in this community. Bourouissa does not engage much in the history of the club but, instead, presents its day-to-day activities and the horsemen involved.

At the entrance to the Roberts Gallery, a space for temporary exhibitions at the Barnes Foundation, sits a crudely fashioned display of Bourouissa’s notes and sketches from his time at Fletcher Street. To the right, the wall is plastered with posters from Horse Day, a pageant organized by the artist in 2014. Held in an vacant lot, Horse Day displayed the skills of the horsemen as well as the horses’ regalia. Several artists constructed the horses’ festive gear, which included a bridle and saddle made of CDs as well as a spectacular ensemble made of strips of red and silver Mylar.

The next area is a viewing room of a split-screen, documentary-style film chronicling day-to-day activities, including interviews with the Fletcher Street club members. The film features a horseman named Peewee riding a horse bedecked with Mylar gear made by Max Lussenhop and Billy Dufala. It closes with clips of a fictitious race between a vintage 1970 Buick and a horse—both of which are driven by Peewee. The horse outpaces the car, and wins the race. This last scene brings to mind the African American folktale of John Henry. Labeled a “steel driving man,” Henry’s prowess and energy was pitted in a race against a steam driven hammer used to construct the railways in the 1870s. John Henry won the race, but ultimately died from exhaustion afterward. Despite conflicting tales and scholarship, Henry, like the Urban Riders, remains a symbol of stamina and strength.

Bourouissa sees a connection between urban neighborhoods in the United States, Guadeloupe, Algeria, and immigrant communities in Paris. He is interested in marginalized people, and in making the marginal visible. In the case of Urban Riders, he portrays the horsemen in their effort to hold onto and to continue building a tradition integral to their community in the midst of gentrification. What struck me deeply about Bourouissa’s film were the words of a youth who considers himself not an urban cowboy, but a horseman. He states that the term “horseman” represents the pride he has in caring for and training horses—a badge of honor. (Part of the agenda of the Fletcher Street Riding Club is to teach youth responsibility.)

In the last gallery, Bourouissa has printed images on flattened car parts. They bring to mind modern and post modern sensibilities, such as Conrad Marca-Relli’s collage-on-canvas works and Robert Rauschenberg’s metal-and-silkscreen art. Unlike his modernist predecessors, Bourouissa’s works are slick and refined: the car parts are carefully honed and the images on them blurred, but readable. The largest relief sculpture in The Hood series is The Ride (2017), a twenty-four-foot panoramic view of the Fletcher Street neighborhood. Bigger is not necessarily better, however. More satisfying are a few large, but more moderately sized sculptures Keason (2017) and Boy with the Hood (2017).

Bourouissa’s attraction to urban sub-cultures was fueled, in part, by his postcolonial studies of Frantz Fanon, who’s The Wretched of the Earth (1961) analyzes the Algerian War of Independence waged against French colonial rule. Fanon is still considered a leading voice in outlining the trajectory of decolonization, and Bourouissa understands the connectivity between postcolonial strivings and the African American and African diaspora experience. He connects urban dwellers of color across continents, their struggles to maintain their dignity, and communities that are often marginalized, or under siege.

The Fletcher Street stables and club are located in a section of Philadelphia earmarked for gentrification. There have been a number of art projects such as the mural Tribute To Urban Horsemen (2005) by Jason Slowik, and Camarillo’s Fletcher Street, which focus on the horsemen and their humble, yet notable, enterprise. A number of stables throughout Philadelphia remain active in various states of functionality. But will the legacy of the Fletcher Street horsemen survive the transition of the Strawberry Mansion neighborhood? Probably not. Yet, the documentation by artists such as Bourouissa exemplifies how communities etch out marks of distinction that evolve over years and, in the case of the Fletcher Street Urban Riders Club, a century. © 2021 FSURC Made With - WordPress Theme by Useful Pixels